info@magnabeat.biz
307-262-9389
Meet Joan
Joan has 30+ years of experience teaching music to children. Put her propriety musical education system to work for you! 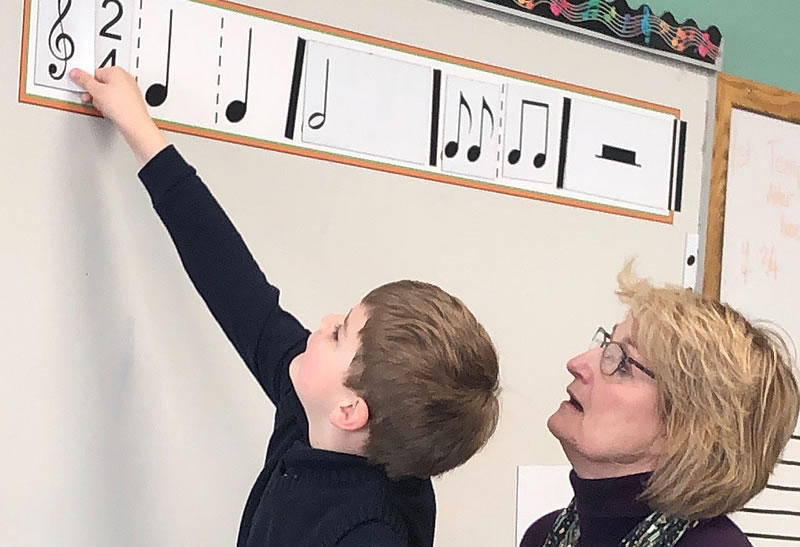 Joan Davies was born and raised in Ambler, PA a suburb of Philadelphia. Her BS in Music Education is from West Chester University, marching with the Golden Rams Marching Band led by master Drum Major George Parks. She was the first female drum major for both her high school and college marching bands. After college graduation in 1977, Joan spent 11 years living around the US and Canada teaching junior high and high school band in the public schools and instructing marching bands (in Chicago, Lake Forest, Belleville, Dallas, McKinney) and on the staff of several drum and bugle corps (including the Reading Buccaneers, Chicago Cavaliers, Cliqúe Allouette Canadian National Champions, and Guardsmen). She was also a clinician with area marching bands and color guards. It was Christmas Eve of 1983 when she landed in Casper, WY to work with the Casper Troopers and has been a resident ever since.

Joan left the Troopers after 3 years, becoming the Executive Manager of the 2 local McDonald’s in town, receiving AAA ratings for 4 years. Her love of teaching and music drew her back to Music Education in 1996, teaching for the Natrona County School District until June 2018.

The next 22 years in Casper were filled with teaching in the field of Elementary Music Education, being assigned to 12 different elementary schools during her tenure with NCSD#1. She was always looking for ways to enrich her students through music. So, she offered before and after school enrichments, which included Drumming Ensembles, Drumming Circles, Adult Drumming, Orff Ensembles, Recorder Club, Choir, Beginning Guitar, and Uke Club. Her elementary drummers, The UBUNTU Drummers from Oregon Trail performed at the WY All State Principals Workshops, the WMEA/All State Professional Convention in Gillette, WY, the Regional MENC Conference in Spokane, WA, and the National AOSA Conference in Denver.

Her Masters of Arts in Teaching comes from Grand Canyon University. She received her Orff Level I training at UNLV, World Music Drumming Levels I, II, and III through Will Schmidt’s World Music Drumming, participated in the Art of Drumming workshops through Arthur Hull, and completed the Teaching Guitar Workshop Levels I and II from master teachers Glenn McCarthy and Ed Prasse.

She was a 3-year member of Marcia Patton’s Alle Breve Women’s Choir and currently sings with Wyoming Choral Arts Ensemble under the direction of Dr. Zach Vreeman, the Casper Civic Chorale (Steve Grussendorf) where she serves as the new VP and plays bass guitar for Casper Kirtan twice a month.

Joan has discovered a passion for theatre, acting and dance. She’s been fortunate and feels blessed to have been cast in several musicals, plays, and recitals, with Casper College Theatre and Dance, Stage III Theatre, Casper Theatre Company, and Rising Star Dance Studio.

She is a proud mom of her two adult daughters: Samantha (Sam) and Stephanie (Stevey).